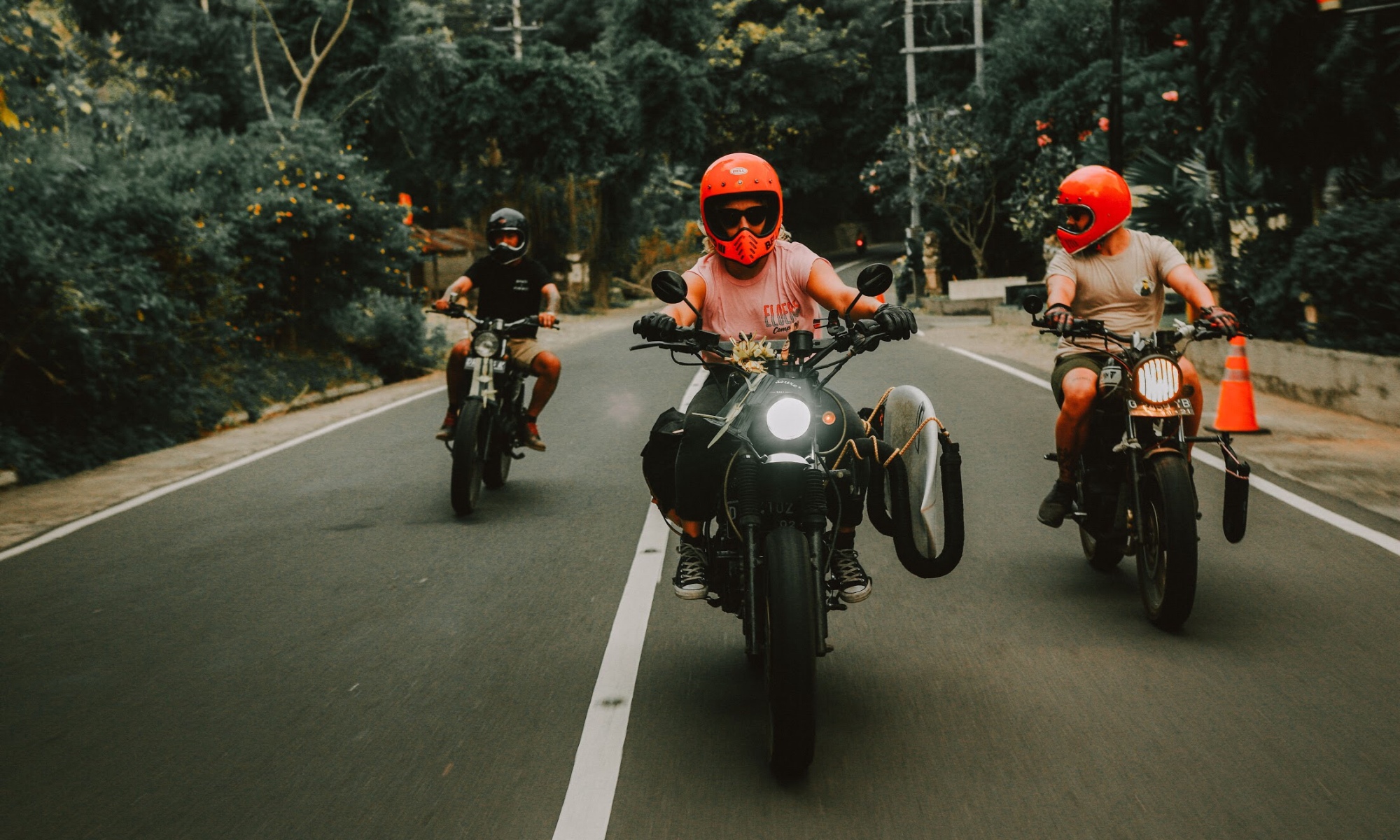 A friend of mine recently encouraged me to pick up the book “Zen and the Art of Motorcycling” again. I had started it before my trip and got so distracted in preparing for the road that I hadn’t kept up with it. I asked him why it was so influential for him and he quoted a bit found in the books’ first chapter. You could tell the quote, about traveling by motorcycle, had been rolling around in his memory bank for years when he recited it for me- “We want to make good time, but for us now this is measured with emphasis on “good” rather than “time.”

And this is exactly what I’ve experienced in my first two days traveling inter-island by motorcycle here in Indonesia.

I got up from my hotel in Bali at 2 AM a few nights ago, roaring to go. My friend Oliver and I had planned to travel together to Lombok, and we agreed to meet in Padang Bai harbour to catch the 4 AM ferry. It took us 4 hours of waiting to board with hundreds of other motorbikes before we actually set sail. There’s nothing you can do about the lack of urgency in Indonesia. With nothing else to do but wait, I notice the people around me. Adults traveling with families or alone, children squashed in between parents’ legs on scooters, weary truck drivers sipping on coffee, or old and sun-soaked men selling rice for a buck.

We finally board the Lombok bound ferry and there’s more waiting. Olly hangs his hammock on the top deck and I nap in a shaded corner. After 4 more hours, we arrive in Lombok and, different to the rest of the morning, everyone is actually on the move. We all de-board quickly and now more than ever I’m feeling some momentum. We ride off, and I’m leading so I’m going fast. My mind’s already thinking about the waves we’ll find here and letting the ocean wash away the dust from today’s trip. Suddenly.. there’s the smell of petrol. Petrol everywhere. All over my engine, practically pouring from a broken seam in my tank.

I signal Olly and upon his reaction to the spill I’m sure now that I’m absolutely fucked. And it’s Ramadan, so everything is closed on the predominantly Muslim island. But I have a secret weapon in Lombok, a new friend and local named Kevin. Elders Company, a brand out of Jakarta who have partnered with me, introduced me to him just in case I needed any help in Lombok. I message Kevin and he gets to me in 10 minutes and brings his mate Dedit along to help. They’re both younger than me and I’m sure now after watching them handle my bike, smarter than me too. Within minutes they formulate a plan. In a nutshell, we find someone to weld the tank and I stay in Mataram and drink local palm wine with them until it’s finished.

Kevin and his friends and family undoubtedly opened their arms to helping me from the second I sent that first text in need. I don’t know if it is because they’re fantastic people, or because of the common thread of motorcycling we share… whatever it was, it was beautiful. We ate, drank, shared culture, laughed, and rode bikes together. My time in Mataram was very special and a time that I would have never have had if I wouldn’t have broken down.

On the last day when my tank was meant to be finished, Olly and I spent the whole day laying on the tile floor at Kevin’s friends house, drifting in and out of naps, eating fruit, sharing meals with them, and spending time with one another. Eventually my tank was fixed and the boys helped me mount it again. Once my bike was up and running, Kevin and his mates came over with their bikes and took us on a sunset ride to Sengigi. It was like a send off and a celebration all in one. We rode our bikes on the beach (they rode, I bogged) and had a swim together. I saw a part of Lombok I had never seen before. And I left the place with more friends than I had when I’d arrived.

My friend asked me if I was disappointed about having been stuck in Mataram for two days. I don’t think he understood the whole “good time” emphasis on “good” concept. I may have been broken down in Mataram but I was never “stuck”.

Turns out other than being a bike whiz, Kevin is a super talented creative too. Check out some of his captures from our time together in Lombok. 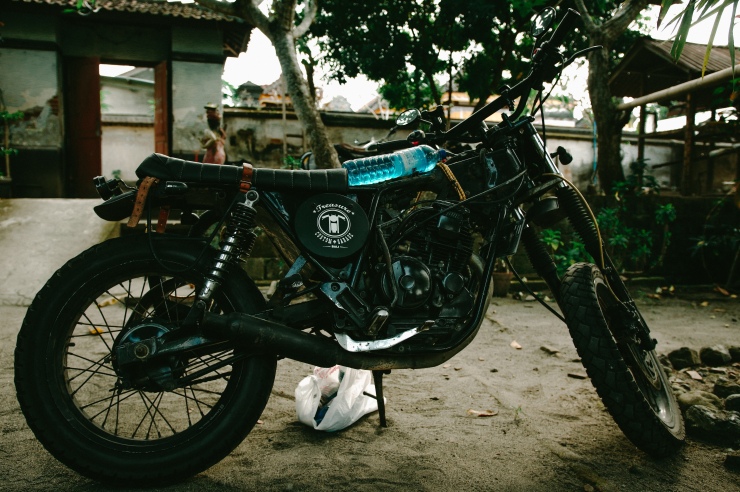 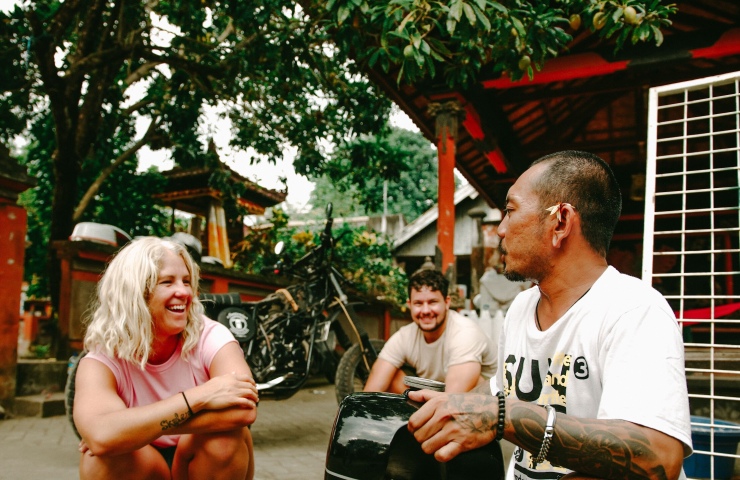 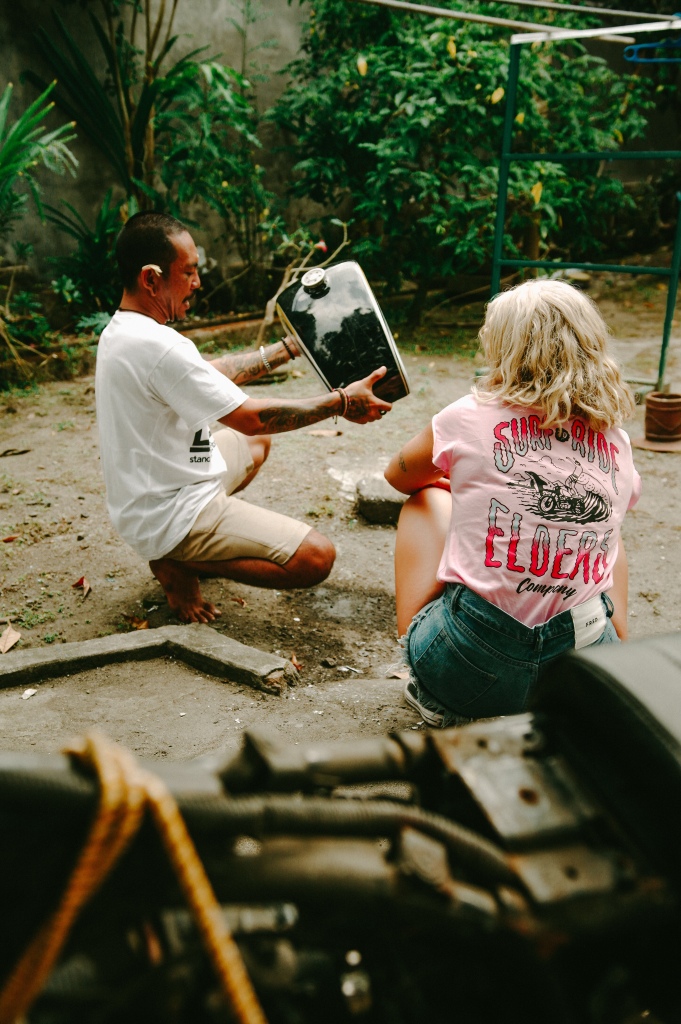 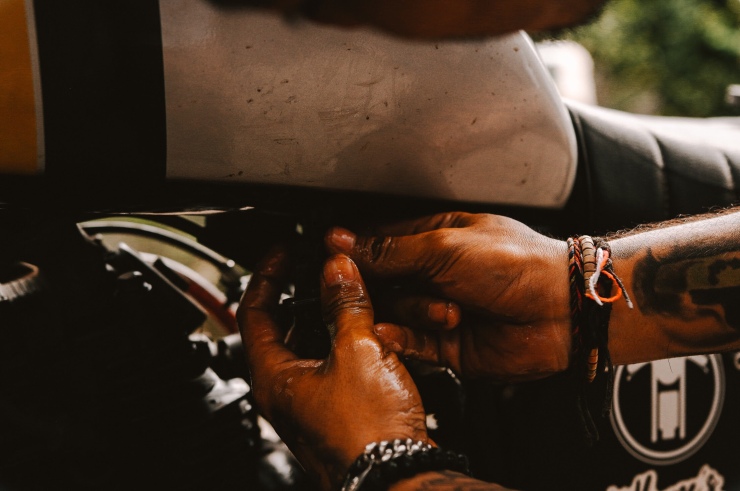 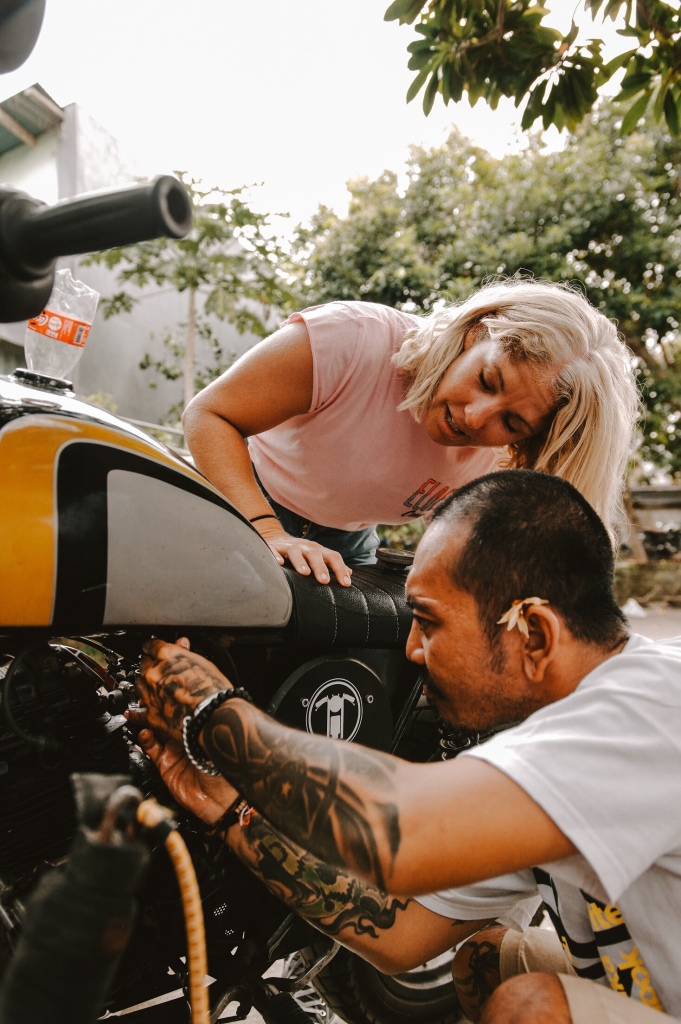 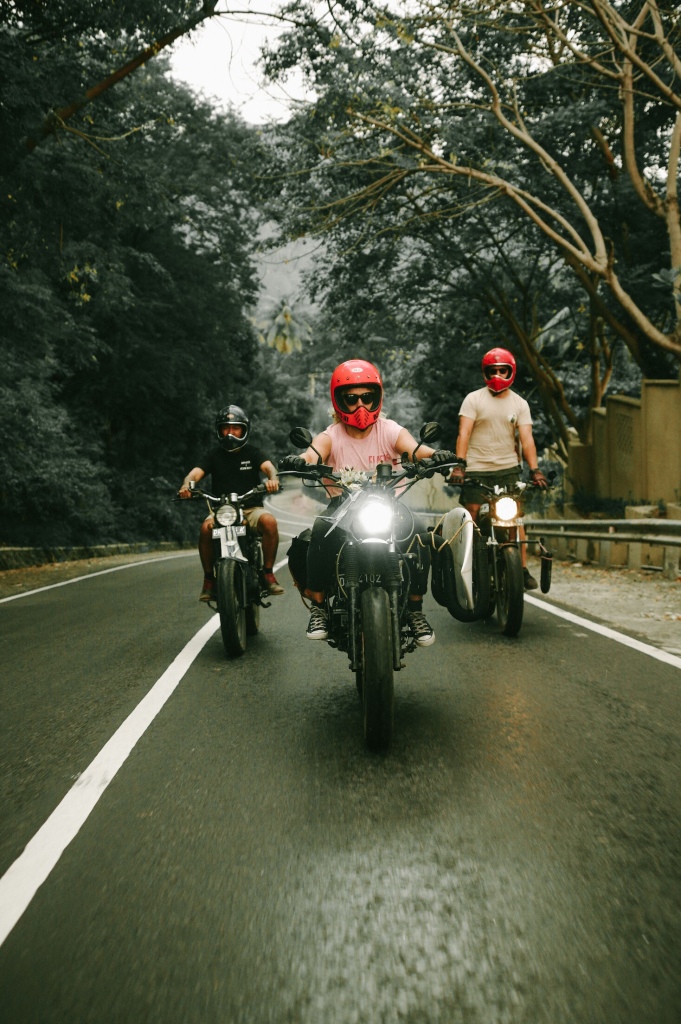 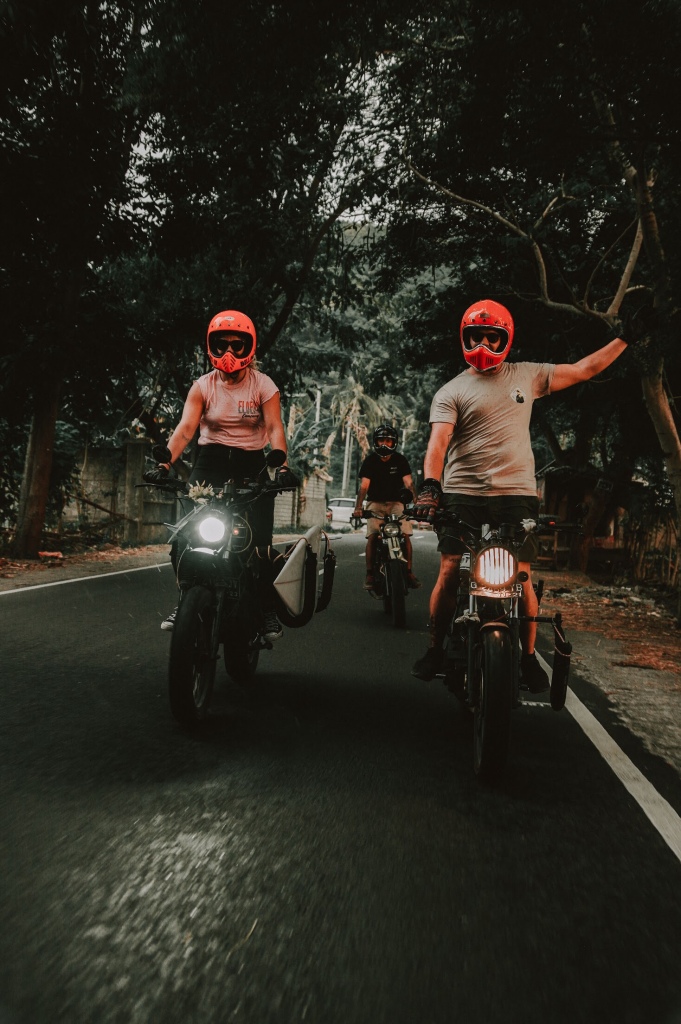 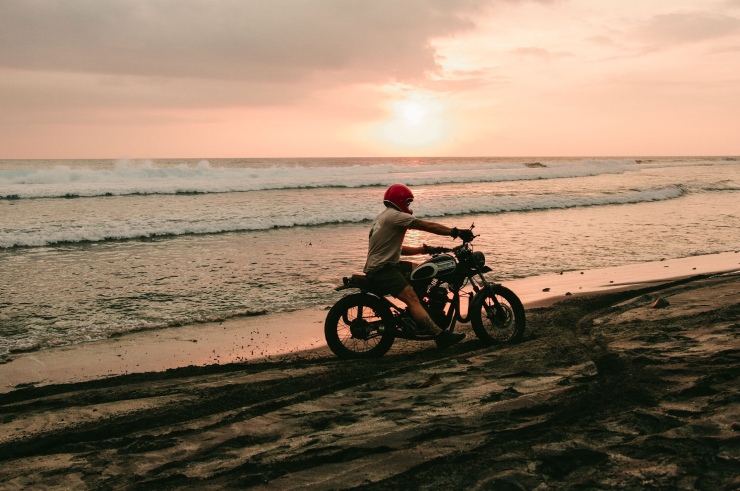 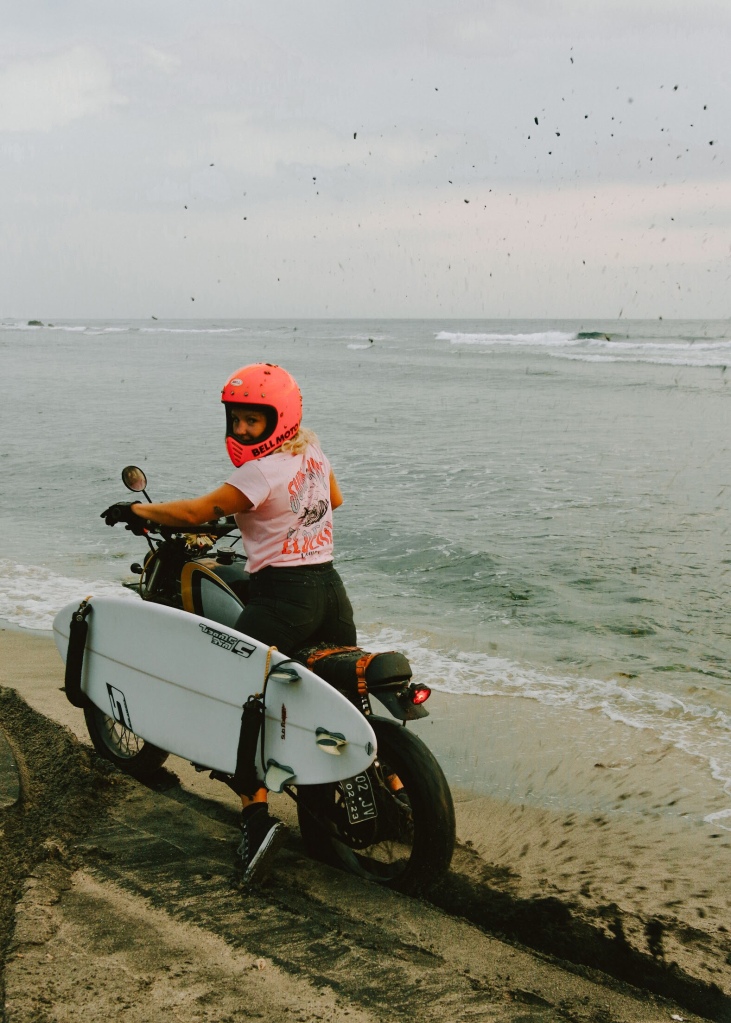 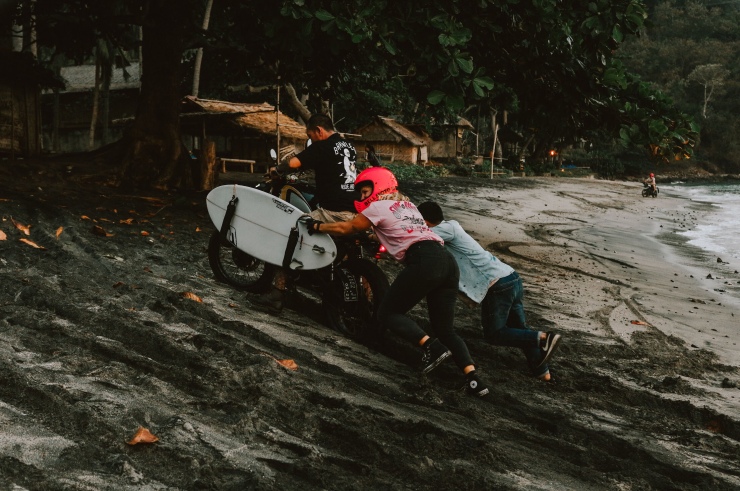 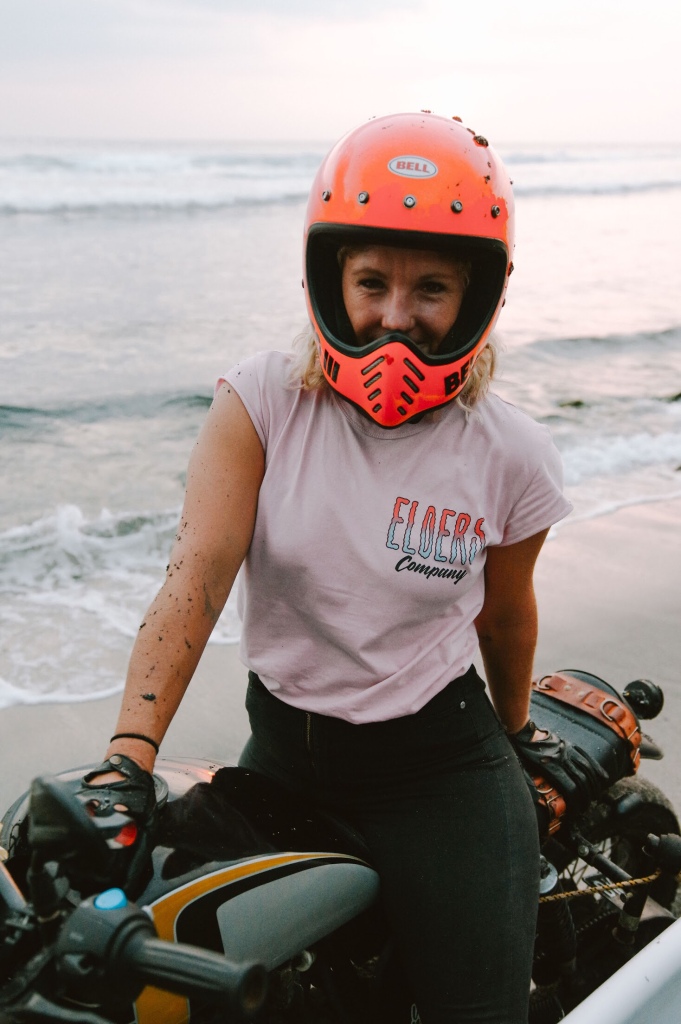 5 Replies to “Where’s Mowgli? Breaking down and slowing down in Lombok.”